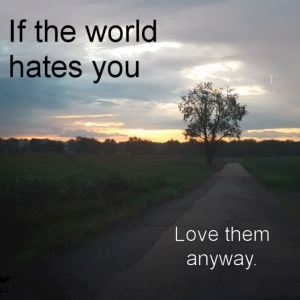 I’ve recently seen some very hateful things spoken about Christians. A few examples I’ve seen are comparisons to ISIS. I quote one “The only difference between Christians and ISIS is that Christians haven’t started beheading people yet”

This isn’t a ‘feel-good’ post, but it’s something we should all be aware of even though we may have experienced this in some fashion already. It’s not a matter of if, but when you see some persecution for Christ.

Since the time of Christ people have hated Christians. We’ve often carry around a bad reputation for being unkind, intolerant, harsh, judgmental, self-righteous, and often as uneducated. As we are human and sinful, there is always some truth behind a reputation and even in the time after Jesus, there were many who proclaimed to be followers of Jesus who truly were not.

However, despite that, anytime you live a life of moral absolutes or speak out about it, you’ll get attacked by those who don’t want to hear that they are doing it wrong.

They would not be guilty if I had not come and spoken to them. But now they have no excuse for their sin. – John 15:22

People who hear about Christ or see him lived out in the life of a Christian now have no excuse or “way out.” They won’t be happy and they’ll strike out at you.

Do not be like Cain, who belonged to the evil one and murdered his brother. And why did he murder him? Because his own actions were evil and his brother’s were righteous. -1 John 3:12

Cain murdered his brother because his brothers righteousness exposed his own evilness. The love God had for Abel, declared Cain’s disregard. Cain responded by killing his brother.

When looking at John 15:18, the word used for if is ei which assumes something is true. Basically Jesus is saying, “If the world hates you — and it does.” So as followers of Christ, we will be hated by the world. But his reminder that He was hated from the time of his birth. King Herod tried to kill him at his birth. The world knew who he was and was trying to prevent it.

Our following of Christ comes with a hefty price tag. We may lose friends or we could lose jobs. In other countries around the world, you could lose your life. But regardless of the extreme, the light that you have in Jesus Christ, exposes the darkness of the world and it will hate you for it.

But why does the world really hate us? First, we are no longer identified with the world. The love the world has for people is fickle. It can change in a moment. Just look through the news today (doesn’t matter when you read this, you’ll find examples). You’ll find someone who “fell from grace” so to speak of the public. Some celebrity who yesterday was everyone’s favorite, but today something came out and the world hates him. To be loved by the world, you need to do what the world does.

Secondly, we are identified with Christ and the world rejects Christ. When our lives truly reflect Christ, people will either reject us or accept us, but they are really rejecting Christ or accepting Christ.

We should be careful as well, because all of our persecution may not be for Christ. We can be jerks. We can be obnoxious and argumentative. We may not listen and be quick to anger. We should truly listen to people, be sensitive and respectful. When we are not, we bring the persecution on ourselves.

Thirdly, much of the world is ignorant of God.

They will treat you this way because of my name, for they do not know the one who sent me. -John 15:21

In other words, Jesus tells us, ‘Don’t take it personally. They are directing their persecution towards Me.’ Many only know the name of Jesus Christ as a curse word. Many don’t own a Bible let alone read one. Those we see as persecuting us may just have never heard a clear representation of the Bible. There is a difference between knowing about God and knowing God.

It is up to us not to chastise the unbelievers for sinful living, yet we look the other way when a fellow Christian sins. Or worse, we tell one they are living in sin, then go and live like that ourselves. Unbelievers sin, it’s part of who they are. We should not condemn them for doing something sinful. We should pray for them, care for them, love them like Christ loved us. We can share the good news of Christ even if they still rebel against it. We should share this Gospel through our lives and our words, not in a belligerent, condemning fashion, but in a loving way, the same way that Christ shared it to us.

Our persecution here in the United States can hardly be called that compared to what others face around the world, but despite the difference in degrees of persecution, we have an opportunity to witness to the world in how we respond to this persecution and through our lives.

But in all, be bold, be strong and trust Christ. It’s better to be loved by Christ, than liked by the world.

Christ follower, Husband and father to 4. Software developer by trade, football / baseball coach on the side. I also develop games in Unity and Monogame on the side as well as tools geared towards gamers. View all posts by jasonlautzenheiser