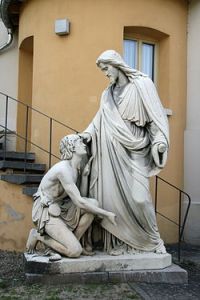 Down the street lives a man with his family. Nice people, but I’ve not talked with them much as our schedules and patterns of life just don’t match up. But when we do, I’ve always found him to be a pleasant person, one who is considerate of others and genuinely cares about his neighbors. The one time the topic of Christ came up, I could sense that while he knew about Christ, he didn’t know him personally. But he also wasn’t ready to start that relationship yet.

Fast forward a few months and I start to see him around the house more often. At first I thought he was just taking a vacation, but after two weeks, I realized that he’s not going back. I see him fuss around the yard, but often just sitting under the tree in his backyard as if deep in thought. Opportunity eventually presented itself to talk with him and conversation seemed normal as any other time I’ve talked with him, however I found out that he had lost his job, but he didn’t seem to concerned about it so I didn’t bring it up.

Forward another month and I notice he’s still puttering around the house so I go over and talk with him one afternoon and find out despite searching, he’s struggling to find a job and they are close to losing their house. After talking with him for a while, I ask if I can pray for him and his family. He looks at me quietly for a moment and then says “Thanks, I probably do need Jesus, but right now I need a job!”

While fictional, this example illustrates a point that needs making. We are all fallen humans, we may see the need for Jesus, but until our “first needs” are met, we have trouble seeing Jesus. These base things are what keeps our minds focused on the here and now and we miss Jesus and the hope for the future that he brings.

So the question becomes: How can we help God meet the first needs of those he puts in our paths?  Can we see the needs that people have?  Can we recognize that by helping meet those needs we can bring the light of Jesus to them?

In the book of Mark, there is a great story of a blind man name Bartimaeus. The story starts with Jesus and his disciples were leaving Jericho.

Then they came to Jericho. As Jesus and his disciples, together with a large crowd, were leaving the city, a blind man, Bartimaeus, was sitting by the roadside begging. When he heard it was Jesus of Nazareth, he began to shout, “Jesus, Son of David, have mercy on me!” – Mark 10: 46,47

Here the blind man, who has great need, cries out to Jesus. But others rebuked him;

See others, wanted him to stay on the sidelines and not bother someone as important as Jesus…they figured, Jesus wouldn’t want to take the time to talk to someone as low as the blind beggar. But look at this:

Jesus asks the beggar what he can do for him. The savior asked him, how can I serve you?

The blind man had a simple yet impossible request. He just wanted to see. But who could do that? Well he had faith that Jesus could or we he wouldn’t have raised the ruckus that he did. He believed that Jesus could heal him. He had a great need, a “first need” that only Jesus could fulfill.

“Go,” said Jesus, “your faith has healed you.” Immediately he received his sight and followed Jesus along the road. – Mark 10:52

Jesus heals him, but then comes the important part. Once he was healed, he followed Jesus. His first need was met, then once that hurdle was met, he was able to follow Jesus.

With Christ, a person’s salvation usually came as a result of His having first met that person’s “first need.”

There are so many examples in the Bible of Jesus meeting a need before the person follows him. A great article I came across in researching this post, is a portion of a sermon from Dick Innes (http://www.internetevangelismday.com/jesus-communicator.php) In this sermon, he gives many examples of how Jesus met the needs of a person and then afterward was able to realistically say, “Go and don’t commit these sins anymore.”

God is interested not just in a person’s spiritual life, but in the total person.

What good is it, my brothers and sisters, if someone claims to have faith but has no deeds? Can such faith save them? Suppose a brother or a sister is without clothes and daily food. If one of you says to them, “Go in peace; keep warm and well fed,” but does nothing about their physical needs, what good is it? In the same way, faith by itself, if it is not accompanied by action, is dead. – James 2: 14-17

Let me close this by quoting from the above mentioned article;

As we have already noted, Christianity is much more than a creed. And witnessing for Christ is much more than sharing the plan of salvation (as important as that is at the appropriate time). Being a Christian and being an effective witness for Christ is to experience God’s love, acceptance, and forgiveness, and to communicate this to every life we touch.

“Do this,” I can almost hear Christ saying, “and you will be one of my witnesses indeed.”

Christ follower, Husband and father to 4. Software developer by trade, football / baseball coach on the side. I also develop games in Unity and Monogame on the side as well as tools geared towards gamers. View more posts